BACK ON TOP: KREIM WINS AND RECLAIMS STANDINGS LEAD

“I’m really happy with the race. Leading the standings again is a gigantic feeling. These were very important points we got today”, said Kreim (#43) after his third victory of the season. „At first, moving to the front was a really tough battle, but after the leaders‘ collision it was important to control the race.“

Jumping to the lead was made possible by the duel between Maxime Oosten (#54) and Bart Horsten (#50). Initially, Oosten led the field and Horsten attempted repeatedly to overtake the previous day‘s leader. The decisive collision occurred during lap six, when Horsten had to retire and Oosten suffered a dramatic position loss.

Kreim wasn’t the only one to gain from the incident, the Hungarian Robert Hefler (#53) could maintain second position thanks to his fast pace and secured his first podium of the season. “In the beginning, I held back a bit because it was a tight fit up front. This was definitely the right decision in the end. I went flat out but had no chance of overtaking Fabian”, the 22-year-old later explained.

Right behind him, Michal Makeš (#47) and Marc David Müller (#22) fought with their teeth for the last spot on the rostrum. After lots of contacts and touches, Makeš finally prevailed and also clinched his first cup podium as well as the lead in the rookie standings. Especially bitter for Müller – Lorenz Stegmann (#99) flew ahead in the last metres and grabbed the overall fourth. Oosten cut his losses and finished in eighth place.

The BMW M2 Cup as part of the DTM programme continues to the Red Bull Ring. In Spielberg, Austria, the season’s second-to-last race weekend is scheduled for 23 to 25 September. 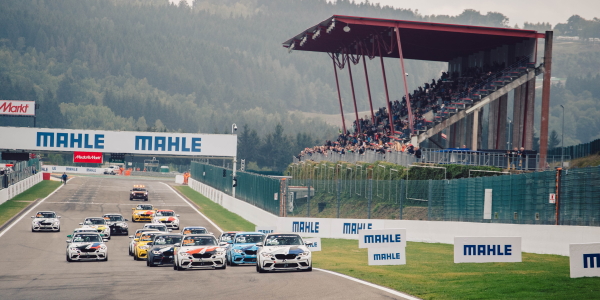 Michal Makeš | 3rd place, race 2
“It was an incredibly awesome race, but also very hectic. I had a good start and then tried to keep up with the frontrunners. In comparison to yesterday, I made a lot of improvement, so it was a good race. I’m certainly very pleased with the podium result.”

Maxime Oosten | 8th place, race 2
“I led the field for the first six laps, until Bart tried to overtake me. He wanted to brake later than I did, however he was on the wet part of the track, and I was on the dry bit. This couldn’t work. Now I’m second in the championship again, so we have to look ahead to the Red Bull Ring now.”