UNTIL THE BITTER END: OOSTEN PIPS KREIM TO VICTORY

The second race of the weekend for the BMW M2 Cup and the same name on the trophy: Maxime Oosten. In an action-packed race, the Dutchman wrapped up his second victory of the weekend just ahead of championship leader Fabian Kreim. Lorenz Stegmann took his maiden win in the rookie classification and his first overall podium finish.

“There was more action today than in yesterday’s race,” said series manager Jörg Michaelis. “There was plenty of bodywork bent out of shape, but the young drivers put together a fair race, so they deserve plenty of praise for that. In the end things got very exciting between Maxime and Fabian – and now the championship battle is extremely close. I am looking forward to the next few races!”

Michaelis is referring to the exciting conclusion of the second race of the weekend. Initially, Oosten (#54) appeared to be cruising to win number two of the weekend in his BMW M2 CS Racing. The Dutchman established a gap to the rest of the field after starting from pole and went about putting together some consistent lap times. But Kreim (#43) had not given up hope of the top step of the podium. The youngster cut the gap to the leader significantly after a safety car was called out onto the circuit in the final stages. With just six minutes remaining as the race went back to green, the double race winner at the Lausitzring made every effort to pass Oosten but had to settle for second-best.

“It is extremely warm here and my brakes started suffering a little as the race progressed,” said Kreim, who is now just five points ahead of the second-placed Oosten in the overall classification. “I wanted to cool them down while the safety car was out, but they didn’t cool down far enough. Maxime was very quick and didn’t put a foot wrong, so I was unable to pass him. Still, second place is a good result and I am happy with my performance.”

Rookie Lorenz Stegmann (#99) rounded out the podium positions at the Nuremberg street circuit. Starting the race from eighth on the grid, the young German driver made an excellent start to the race and performed admirably to rise though the field to third. This marked Stegmann’s first ever win in the rookie classification. The second-best rookie, Bart Horsten (#50), crossed the finish line in fourth overall. After four rounds, Horsten is only just ahead of Stegmann (66 points) and Diego Stifter and Michal Makeš (both 56 points).

Marc David Müller (#22) rounded out the top 5. Müller had been on course for a podium finish, but a chaotic restart after the safety car dashed his hopes of a top-three placing.

The BMW M2 Cup continues from 26 to 28 August when the series visits the Nürburgring for races five and six of the season. 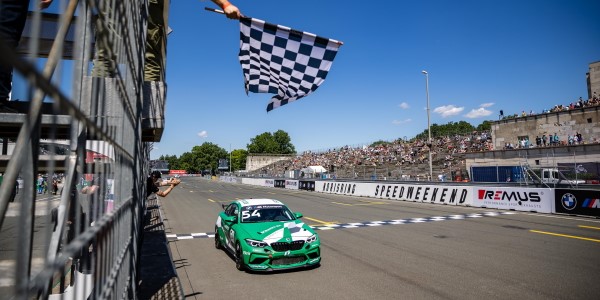 Maxime Oosten | 1st place, race 2
“It was a fantastic race. At the start I was able to make a good getaway, but the chasing pack closed up as the race progressed. I was looking in my mirrors, because I really wanted this victory. In the end I managed to bring it home and I’m really happy with the result.”

Lorenz Stegmann | 3rd place, race 2
“I am very proud. Before the race I wasn’t sure what would be possible today, so I am all the more delighted with my first podium. The start was excellent, I was good on the brakes and was able to make up a few positions at the start.“